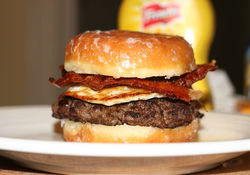 "Beef" is meat from full-grown cattle about 2 years old. A live steer weighs about 1,000 pounds and yields about 450 pounds of edible meat. There are at least 50 breeds of beef cattle, but fewer than 10 make up most cattle produced. Some major breeds are Angus, Hereford, Charolais, and Brahman.

"Baby beef" and "calf" are 2 interchangeable terms used to describe young cattle weighing about 700 pounds that have been raised mainly on milk and grass. The meat cuts from baby beef are smaller; the meat is light red and contains less fat than beef. The fat may have a yellow tint due to the vitamin A in grass.

"Veal" is meat from a calf which weighs about 150 pounds. Those that are mainly milk-fed usually are less than 3 months old. The difference between "veal" and "calf" is based on the color of their meat, which is determined almost entirely by diet. Veal is pale pink and contains more cholesterol than beef. 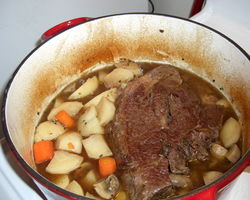 Beef is one of the most common meats consumed all around the world. Beef is a tasty meat obtained from cows and it is included in most European, American and Middle Eastern dishes. One of the most commonly eaten dishes, the hamburger, is generally made of Beef. Although it is one of the most common meat types served in North America and Europe, there are some religions which forbid the consumption of this type of meat such as Hinduism where cows are considered worthy of veneration. In Judaism the consumption of beef is allowed only if the bovine is butchered and prepared according to the religions rules and under the control of a rabbi. There are numerous methods for preparing beef meat; beef can be cut into steaks, short ribs, pot roasts or it can be ground and used for making hamburgers. Beside the meat there are many other parts of the bovine which are also very much cooked such as the tongue which is used for preparing sandwiches in Western cuisine, the stomach as well as the heart, the brain, the pancreas, the kidneys and the testicles.

Retrieved from "https://bbq.fandom.com/wiki/Beef?oldid=4324"
Community content is available under CC-BY-SA unless otherwise noted.